The competition is open to all professional shooters active in military and law enforcement as well as select qualified civilian marksman.  This event is held on very hilly terrain, in the heat of august and targets are very small.  Hits are positive scores and misses are negative scores so finishing with a score above zero is quite difficult.  Wind, sun, heat, mirage, optical illusion, dust, bugs and exhaustion all take their toll on the shooters and their equipment.  This competition is classed as one of the most difficult in the world and is widely attended.  We have hosted the rifle and carbine events for the last two years and plan to continue for 2011.   There are over 100 metal targets standing on our ranch to challenge the best shooters in the world.  If you think you can hit with your rifle a 10 inch square at 1000 yards while running a timed several mile long course, you should sign up for the event next year.

The chopper event is a separate event held in conjunction with the two other courses of fire and is unrelated to the ITRC except that it is held here at the ranch at the same time.  4 metal targets are spaced on a ridge line over 1/4 mile and the shooter in the chopper engages the targets.  All chopper shooters shoot the same guns so it is equal and the most hits on targets win the guns used in the event (nice AR-15’s). 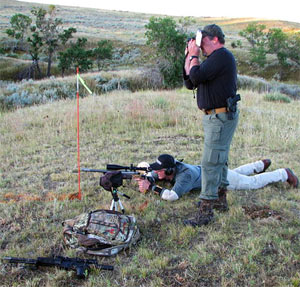