This house has an interesting history. The Bliss Family purchased this ranch from the Garst family (who had settled the ranch) in the summer of 2000. The home in this picture looked considerably different that it does here. This newly refurbished, modern home was in a bad state of disrepair and was very dated to the 1960’s. It had at least 4 different stages of construction evident, as well as several varieties of wiring, plumbing and various problems. Patty Bliss (who you see in the photo below) is a very patient wife as we moved into a construction zone. Concrete dust, walls torn down to studs, no water, no kitchen and a lack of basic comforts welcomed us into this formerly old ranch house. After months of renovation, many tens of thousands of dollars and hundreds of man hours, we found ourselves living in a pretty comfortable, if not smallish, home. The original structure was an 500 square foot, 1940’s vertical log cabin moved to the site in the early 1960’s. Next came a 1600 square foot basement addition and upstairs section in the mid to late 60’s. They a room was added to the front in the 1970’s with a 130 square foot porch somewhat later. Our job was to take all the separate pieces, tie them together and finish the project in a reasonable time. We completely rewired and replumbed the structure of course. All the heating was modernized and central air added (replaced the swamp cooler with central air). All of the windows were replaced with high efficiency modern versions. Every surface in the home was replaced, covered or repainted in some way or another. In other words, it would have been easier to tear it all down and stick a big triple wide mobile home in place. But then I wouldn’t have all this fun story to tell would I? 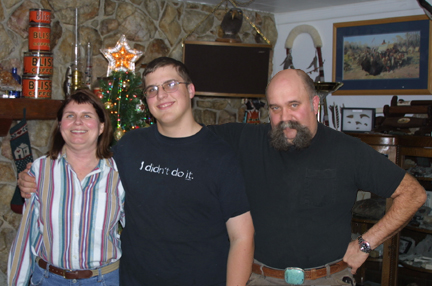 Here we are at Christmas 2004. The little one in the center is my 16 year old son Chris, the cute cowgirl on the left is Patty, and that leaves Frank on the right. 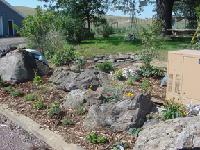 Touches of home and civilization.The great thing about living on a ranch with lots of sandstone on it is free garden decorations. We have always been frustrated gardeners and will over the next couple of years, continue the renovation of the landscape around the homestead. In this arid country, even green grass is a luxury hard fought for with summer watering. Fortunately, the Garst family had some wonderful established plant and shrubs already around the home. They hadn’t been worked with for a while but we decided to use them wherever possible.You will notice a light brown box in the picture to the left. This box reflects a necessity of life out here. This box is actually a Twenty Kilowatt automatically transfered generator. Electricity is an essential commodity anywhere but more so on the ranch. We are literally at the end of the electric line. The Montana/Wyoming border is the boundary between two electric co-ops and as such, part of the ranch is in an electric “no mans land”. We have regular grid outages from storms and other events that can last for days which can leave our stock without water. Some other things are mission critical on the ranch too. Our walk-in freezer is usually full of beef, propane heat is distributed with electric fans and most tools are electric. We have to be electrical grid independant during outages. The fuel for the generator is a 1000 gallon propane tank which would power the ranch for up to two weeks straight. 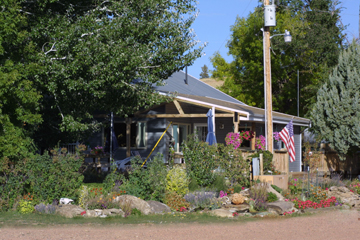 Here is a picture of the rock garden above two years later after extensive planting and lots of watering. Most of the plants are hardy to this cold climate but they have to like direct sun at this spot. It is nice to see hard work pay off. 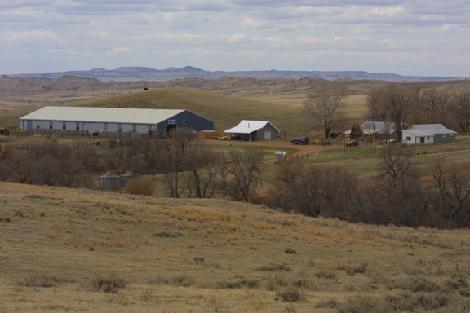 This shot is an overview during cold early spring day in 2002. It looks to the northwest toward Montana. 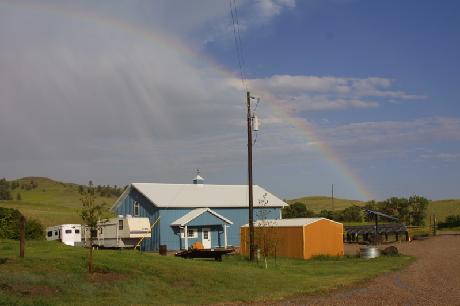 The blue building is our new guest quarters for clients to the Dinosaur Bed and Breakfast. This building is expected to be finished on the inside by the summer of 2007. It will be very nicely done with only the best of all things inside for our company. It has been an interesting project for me to work on when the climate doesn’t allow me to walk around looking for dinosaurs. 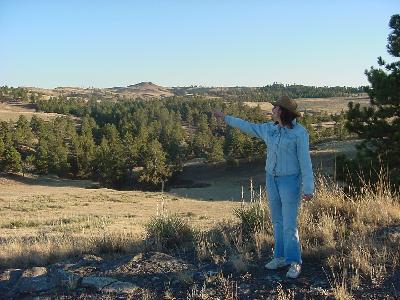 We are on the western edge of the Black Hills. This photograph is on a Montana section of the ranch. All of the land in the photo belongs to the ranch and is covered by a rich mix of pines, cedars, sage brush, numerous grasses and other misc. shrubs. This type of environment is good for a summer pasture because the trees provide good shade for the cattle to escape the heat of the day. The pine trees are problematic too because pregnant cows eating pine needles absorb turpentine from them, causing spontanious abortion of the calf. Because of this, treed pastures are useful only in the late spring through late summer. This particular location is about 45 casual ATV ride minutes away from the ranch headquarters. The wild life shares this section with the cattle and is as diverse as you would expect for this part of the country. On a good morning, you might see a pair of Lynx stalking rabbits, coyotes hunting mice and eagles flying overhead. This scenic section has several large dry washes on it. There are actually dozens of large washes on the ranch. Some of these gullys run for miles and are large enough to drive trucks down and infact are sometimes uses as part of the ranch road system. It is usually in these washes where dinosaurs parts and pieces appear to the careful observer. They are not common but they are there.

This picture shows another environment on the ranch. The grassland pastures that are treeless make up a little more than half of the ranch. These are very important sections because they really feed the cattle well. They are not as diverse biologically or botanically as the treed pastures. They are extremely important in the winter when the cattle can’t be in the trees. The grassy pastures are wide open to the elements though and can be a windy place without windblocks. This photo was taken during the late summer of 2001 and shows the effect of the 4 year long drought we are in on the color and quality of the grasses. 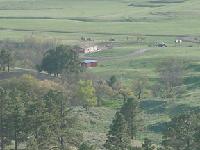 This photo is of the Williams House located on the Wyoming side of the ranch. It shows that houses are built in sheltered areas. Winds are low enough here to make site selections acceptable. The tree species in this picture are more diverse having both coniferous and deciduous (Box Elder and Cottonwood) varieties that are better watered because of their location in a wash. This photo was taken in the early spring of 2001 and as such shows the trees just sprouting and the grass quite green. Since we live in an arid part of the country, this greenness can be short lived but occasionally, the grass will stay green all summer with good rains.